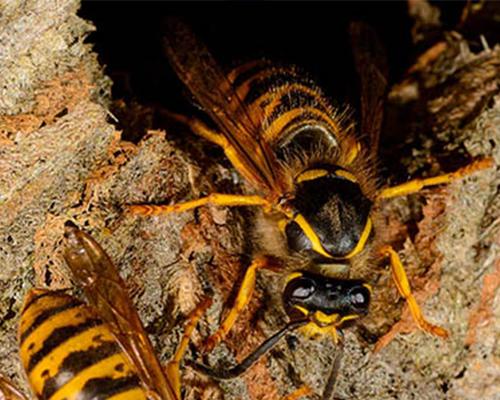 How Do I Know I Have A Wasp Nest?

If you see wasps entering & leaving a hole in the ground, a wall, roof or any other part of a building between May & November then you probably have a wasp nest. You may be getting ‘unexplained’ wasps inside a room which may indicate a nest nearby. In the Autumn as the days get shorter wasps get attracted to lights inside building which they confuse with sunrise.

Do not be tempted to block the hole up, this will make them angry and aggressive but will not kill the nest, they will find another entrance & may even come inside the house. Some species of wasps will build outside in bushes and trees. You will see a grey or brown structure made of a paper type material. Wasps are aggressive and will sting readily if they think the nest is in danger.

Why Should A Wasp Nest Be Treated?

Every year there are deaths from wasp stings. Although they do some good by feeding on flies, caterpillars and other insects the wasp numbers are probably artificially high because buildings supply unlimited nest sites which in purely natural conditions would be restricted to caves, hollow trees and other natural cavities. They cause massive amount of damage to fruits in the Autumn.

We treat the nest or the entrance of the nest using an insecticide powder and a special lance for application, capable to reach up to 2nd floor from the ground. This is a modern biodegradable insecticide that is not highly toxic to mammals, but is extremely so to Wasps and Hornets. The entrance to the nest or the nest itself will be treated using this insecticide. Inspection before the treatment will be carry out in the loft for bats or open water tanks. If the nest is located in the loft during the inspection, it will be removed FREE of charge after the treatment finish.

After treatment the nest will remain in a hyperactive state for up to 3 hrs, but usually Wasp activity ceases much sooner. Keep people & pets away from the area until activity has ceased. Close windows & warn neighbours to keep away.

The 3 main points to remember are:

The price for one-off treatment is :

All prices are subject to a VAT surcharge. T&C may apply!